Heathen holidays, or Holy Days, are often marked with a feast. The most popular form of feast is called a blot, or blood-sacrifice, which I’ll explain in Part 3 of Lesson Four.

There are three main seasonal celebrations based on the words of Snorri Sturlsson in Ynglingsaga, Section 8 – Odin’s Lawgiving

On winter day there should be blood-sacrifice for a good year, and in the middle of winter for a good crop; and the third sacrifice should be on summer day, for victory in battle.

Modern Heathens interpret these holidays as Winter Nights, Yule and Eostre/Ostara (Anglo-Saxon/Germanic). The specific dates on which the feasts are held will vary according to one’s region. There are a few other holy days, besides the main three, that were and are observed, which are listed here as well.

Winter Nights marks the end of summer and the beginning of winter. The best time to hold this holy feast is after all harvest activities are finished and before the full onset of winter. In my region of the costal, temperate North Atlantic, Winter Nights could happen anywhere between mid October and mid November. It could be marked by changes in the environment as well, such as the changing leaf colour on trees, or the start of snow falling, or the first freeze. The Anglo-Saxon version of this holy day is called Winterfylith, or Winter Full Moon. It is often held on the first full moon following the fall equinox.

There is some similarity between the Celtic Samhain and Winter Nights, in that the veil between worlds is thinning and worship of the dead is shared, although, the veil is thinnest in a Germanic worldview at Yule. However, in some regional practices, Winter Nights was called Alfablot, or Disablot, in honour of the male and/or the female ancestors. Kveldulfr Gundarsson says, in his book Teutonic Religion:

The Wild Hunt begins to ride on Winter Nights and continues throughout the winter until Eostre; from Winter Nights onward, ghosts, trolls, and other such dwellers in the Out-Garth gain greater and greater might in the darkness.

Modranicht, Night of the Mothers, or Mother Night, according to Bede, occurred on the evening before Yule began. Traditionally, women of the hearth gathered to honour the Disir and spend time together. Often baking, cooking, or traditional fibre crafts were practiced in a cordial setting in the home.

Yule is by far the biggest and holiest event of the year for both modern and historic Heathens. It is often held on December 20-21, the night of the winter solstice, which is considered the 1st day of Yule of a total of 12 days of Yule. The final, 12th day of Yule would be New Year’s Day. The date of Yule need not be fixed though and regionally there may be slight variation. I’m quoting Kveldulfr again here because he has put it so splendidly:

These 12 nights are the Wih-Nights – a space of time set apart between the old year and the new, in which the greatest workings are wrought and the greatest wyrds turned. The god / esses are called “yule-wights,” for their might is greatest at this time.

During the nights of Yule, the doors between the worlds are open. Wodan’s Wild Hunt and the Perchtenlauf both ride at this time, and the dead walk freely in the land of the living.

Because the veil between the living and dead is thinnest during Yule, ancestor veneration is greatest at this time.

An evergreen tree and evergreen branches  are used to decorate the inside of homes. A feast is held on the first night of Yule and gifts are exchanged. A Yule log was lit and kept burning all night to welcome the return of Sunna to begin the lengthening of days. It may sound a lot like Christmas. Indeed Yule is the precursor to the mass Christians eventually began holding at this time and they adopted many of the heathen customs during the conversion from Heathen times to Christian times.

Working during Yule was kept to a bare minimum and often the festivities would continue into the wee hours for the whole twelve days of Yule.

A feast of Thor in Iceland is held on a Friday between the 19-25 of January called Thorrablot. It is held to keep up the spirits during the long nights of winter and to celebrate the lengthening of days. Specialty food is eaten during this time; Hakarl by the Icelanders and herring and oats at Troth feasts.

Disting, or Thing of the Idises, is held on February 2 as a public event, as opposed to a private household affair. Customs associated with Disting were the ploughing of the first furrows where cakes were laid as an offering to the earth and the wights of the land.

The month of April was named after the Goddess Eostre or Ostara. She is thought to be a a goddess of the dawn, as well as spring. Like Winter Nights, this time marks a defining change in season, from winter to summer. The Goddess Ostara was not known in Scandinavia but some similar customs between May Day and Ostara, such as fire leaping to drive out winter, indicate the close proximity for these holy days. Eostre/Ostara is held around the spring equinox, during the waxing moon, or on the first full moon after the spring equinox, or on May 1, in alignment with the Scandinavian May Day.

Note* I cannot seem to make a definitive connection, or lack thereof, between May Day being associated with the beginning of summer, the festivities of Ostara/Eostre and the Germanic Walpurgisnacht, also held on May 1.

Walpurgis, or Walpurgisnacht, is a festival held by the Germanic peoples that is named after the christian St. Walpurga. The original Teutonic name of this holiday is unknown, but is a coming of summer festival from heathen times adopted by the Christians. Commonly, it is a time when witches gather to feast and celebrate a time of magic and and love. There is often a bonfire held and leaping the fire is thought to bring luck.

Another common holy day held by many Heathens is Midsummer, held on or near the summer solstice. This holiday is based on its popularity in more recent Scandinavian folklore. Sunwheels made from dried stalks of corn or twigs are burned in Sunna’s honour and leaping a bonfire for good luck happens on this holy day as well.

The feast of Freyfaxi, or Loaf-fest, falls on the eve of August 1 and coincides with the beginning of the harvest. The first sheafs of grain harvested are made into a ‘corn dolly’ and left lying in the field as an offering, burned in fire, thrown into running water, or hung over the door in the home. Eggs and bread were also given. 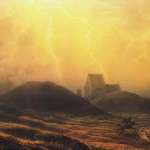