This is one of those months that has five weeks in it, so I’m slipping in The Goddess Freyja and my write-up about her. It also coincides with the completion of my newest design which is also Freyja! Of course I did plan it this way!

The Goddess Freyja is the twin sister of the God Freyr. They are the children of the God Njord. Freyja, along with her brother and father belong to a tribe of Gods known as the Vanir. The Vanir are thought to be a much older tribe of Gods and Goddesses than the Aesir. In Old Norse her name means Lady. Historically, as a Goddess, she is not well known outside Scandinavia. The term for ‘lady’ in German is Frau and is commonly used in an ordinary sense, meaning a woman. Only in Scandinavian languages does the term ‘lady’ strictly refer to the Goddess Freyja.

She is greatly revered for her association with love and sexuality, even promiscuity. From the book Our Troth:

Freyja is especially a goddess of women who do as they will and love as they will without worrying about social constraints or anything else.

Love songs are written to her which were once outlawed in Iceland during the conversion times. However, unlike other societies, historical and modern, whose religion advocates the subjugation of women, our ancestors had a strong healthy female role model in the Goddess Freyja. In Thrymskvida, Freyja refuses to marry the frost giant Thrym when he wants to marry her as ransom for having stolen Thor’s hammer. The Aesir and Vanir do not force her to do so although they do ask. Instead, when she refuses, Thor dresses up as Freyja and goes in her place. Thrymskvida is a well known and fun poem in the Poetic Edda. It is a great story for children!

Freyja is married to Od, whom the lore only suggests ‘to be lost.’ Some people think Od and Odin may be one and the same, possibly in times preceding the Viking age. There are many similarities between Freyja and Odin; both are freely sexual, associated with the magical workings of Seidr, and both are associated with battle, each receiving or choosing half the slain from the battlefield. Freyja’s half go to her ‘roomy-seated’ hall Sessrumnir on her battle plain Folkvangr, and Odin’s go to Valhalla, both in Asgard.

Freyja’s tears are thought to be made of gold as is suggested by the use of the term as a kenning for gold in the eddas and sagas.  Her fondness for gold is apparent in the tale Sorla Thattr where she gave four nights of her love to four dwarves, the Brisings, to get her necklace named Brisingamen which is made of amber and gold.

Necklaces were thought to be a sign of nobility in ancestral times and impossibly large necklaces, too large for human use, have been found in bogs throughout the Scandinavian lands, which has led historians to believe they were offerings to the Goddess Freyja.

She rides a boar called Hildisvini, or battle swine. She is also known by the name Syr, which means sow.

Her association with cats comes from the Prose Edda, where it is said she rides a chariot pulled by cats and might possibly also come from her practice of Seidr.

Freyja design in gold by The Crow’s Fjord

Thrymskvida in the Poetic Edda mentions a falcon cloak she owns which she lends to Loki so he can retrieve her necklace after it is stolen. In my depiction of Freyja, I have left only her braids visible, emerging from the feathers of the falcon cloak. The spear and the shield tell of her association with battle. The cats on her shield tell of her work with Seidr. I didn’t have room for a chariot in this image but I wanted the cats to be in this design so I hope you like them there! The Brisingamen is made of twisted/woven gold and set with amber. It ties tightly around the neck like a torque. The boar tusks in the design suggest she may be riding Hildisvini, and who knows, she may be with the volva Hyndla, as they ride to Valhalla, as told in the Lay of Hyndla!

Is Friday Named After Freyja?

The Goddess Freyja and the Goddess Frigg have sometimes been confused in their association with the word Friday, as the day is named for one of them. Patricia M. Lafayllve, in Freyja, Lady, Vanadis, sheds light on this confusion:

if one loooks at the roots of the names Frigga and Freyja, the difference between them becomes clear. Frigga’s root stems from the Proto-Indo-European *pri “to love” – a word whch later became associated with the word “fridh”, (“frith”). Freyja, on the other hand, comes from the PIE root *per, meaning “forward,” “first,” or “chief.” This later became the porto-German world *frowo, “prominent woman,” or “Lady.” In other words, these two goddesses’ original names come from different meanings – one comes to be associated with frith (and later, blessings) while the other becomes the “prominent woman.”

While some are of the opinion that Friday, dies veneris, belongs to Freyja, others lean toward Frigga since most of the other day-names come from continental Germanic names (Woden, etc.). In fact, this strongly suggests that Friday is named for Frigga, since Freyja is not mentioned outside of Scandinavia at all. No evidence exists in primary sources to associate Freyja with Friday – even in Old Norse the word for Friday is ‘frjadagr,” a borrowing from continental Germanic. In Faroese, the word for Friday is Friggjadagur, which clearly maintains Frigga’s name. Many modern heathens do choose to honor Freyja on Friday but this must be seen as a personal practice rather than one based on historical information.

Most interestingly, Tacitus says there were two tribes of amber collectors on the shores of the Baltic, the Suiones and the Sitones. They worshiped the Mother of the gods and they wore the device of a boar around their necks (tusks?) for protection and security and best of all, the Sitones were ruled by women!

Freyja – Gold and Freyja – Grey designs are available to be printed on more than 50 different products including T-shirts, hoodies and other personal accessories as well as home decor. Please check out The Crow’s Fjord shop at Red Bubble and tell your friends! I could use the help in getting the word out about the new Freyja design!

Freyja design in grey by The Crow’s Fjord

As an aside, I am starting on a new design next week. I’m thinking of doing Njord, but I’m also thinking of doing Tyr/Tiw. Any preferences? It will be ready in early December; in time for Yule! Send me a message, email or leave a comment. I will take all suggestions into consideration!

Thank you so much for reading and/or following along with the Intro to Heathenry course! I’m learning new things and I hope you are too! 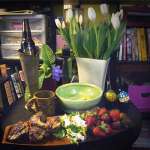