There are three primary Heathen rituals practiced by modern Heathens; blot, húsel, and symbel. The tools used in these rituals can include a drinking horn or cup, mead, ale, blessing bowl, sprinkling twig, and hammer. There are other forms of ritual, such as naming ceremonies, land-taking rituals, weddings and burials. I will leave these for you to read about in the sources below.

Prayer – poetry specific for the focus of ritual

The Hammer rite is a modern construction. The only mention of the use of the hammer-sign in historic times was actually someone making the sign of the cross (Linzie 2003).

King Hákon the Good, a Christian at heart, made the Sign of the Cross over his cup when he drank the libation, but his heathen friends said that he was making the sign of the hammer and dedicating his drink to Thór. The Christian sign might well have been mistaken for that of the hooked cross [swastika, which was sacred to Thór], and the Christian custom of making the sign of the Cross over a drink or a meal, could have lead pagans to hallow their food with a comparable symbol.

However, it is commonly used today to hallow, or make a space sacred, in preparation for ritual. The basic method is to use an actual hammer or one’s fist to make the sign of the hammer in the four directions by facing in those directions. There are many variations of the hammer rite widely available to read up on in the sources below.

watch and ward our stead.

There are hundreds of beautiful rites, poems, ritual calls, poetry of praise and words for charms in his book. I highly recommend it!

Blot is a ritual sacrifice. It is sometimes called a blessing. The word blot can be thought of as meaning a blood sacrifice. In historic heathen culture it was the sacrifice of an animal, whose blood was then sprinkled on participants followed by ingesting the meat in a feast. In current Heathen practice blot is considered to be any kind of sacrifice made to the Gods, whether it be that of an animal or a votive offering. This act of giving is considered a form of interaction, of showing thanks to the Gods, ancestors and wights for the gifts of life, strength, wisdom and luck they offer to us on a daily basis.

From Our Troth Vol 2. the basic form of blot would look like this:

However, I’m having a wee bit o’trouble discerning which bits of information go with which step (partly the reason this article is late, I’ve been boggled by the vast amounts of information out there!). So here’s something simpler to start with from Patricia Lafayllve’s A Practical Heathen’s Guide to Asatru on how to bless mead to make it sacred; to represent the water in the Well of Wyrd; to separate it from average, everyday mead:

A kenning is a word or phrase used in place of a subject.

Alliteration is the repetitive use of sound, such as the ‘b’ sound used above in ‘Blessed boon of bees.’

Húsel is a sacred communal meal. It can follow the blot, or can be held separately.

Symbel is a community building ritual meant to strengthen bonds between people. It is not a religious ceremony and toasting to the Gods is not its primary purpose. According to Anglo-Saxon research the main attendants of symbel would be the host, gatekeeper, server, thyle, and scop.

The Host is the person whose hall the symbel is held at.

The Gatekeeper is the person responsible for greeting guests as they arrive and showing them to their seats.

The Server is responsible for filling the horns and/or cups.

The Thyle is the person who challenges those who make boasts or oaths.

The Scop is the person who recites poetry or provides other entertainment.

The most common structure of a symbel has the arrival of guests greeted by the gatekeeper and shown into the hall, a speech made by the host, the serving of drink by a designated server in cups or horn and the welcoming of the guests as they are served followed by the host formally toasting the ancestors, and possibly the Gods, which is followed by a round of boasts and oaths.

Sharing a horn with a guest was a sign of welcome and social integration with each other, the Gods, wights and ancestors. Kveldulfr Gundarsson states in his Teutonic Religion:

By sharing the horn, those within the hall also showed that they shared frith and fellowship with one another, strengthening the bonds of troth that bound them.

Symbel often follows a blot and/or Húsel and can be tied into a ritual through poetry.

One other ritual I should mention is the North American style three round format for blot and/or sumbel. Participants pass a horn around, beginning with the host, who presents the focus of the ritual and calls the Gods and Goddesses to be present at the ritual. He or she then drinks a little, pours some mead or ale onto the ground or into a blessing bowl as an offering to the one just called and passes the horn to the next person. They repeat the process, calling the God or Goddess they wish to invite, they drink, then offer mead or ale and pass the horn again, and so on until the horn reaches the host again. This would be the first of three rounds. The second round would be dedicated to calling the ancestors, and the third round, which can be a perpetual round until the end of the ritual is for toasts and boasts and occasionally oaths. Oaths must be pre-approved by all members attending the ritual as those attending will often be held responsible for the oath taken to ensure its completion. It is a responsibility, so oaths are never taken lightly.

A note about the mead or ale in a drinking horn. A horn must never be emptied by a participant. This is called breaking the horn. The last portion of the mead in the horn must always be offered to the honoured guests ie gods/goddesses/ancestors. The horn may be refilled as often as necessary. Just pause to refill when necessary and carry on with the ritual.

It is acceptable to come and go from a ritual that is in progress, as long as it is done quietly and respectably ie as in the case of visiting the washroom.

Finally, it is courteous to let whomever has the horn do the talking! 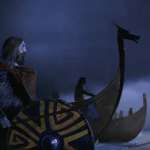