Wights is a word of Germanic origin that means creature. All creaturely things can be considered wights, including humans. However, it is commonly used in Heathenry to describe spirits, ghosts, or supernatural creatures. Some of the most common wights found in the lore include the Idises, souls of the female family line, also known as Disir, which will be covered in part 2; part 3 is Alfs, and part 4 is House Ghosts and Landvaettir. Part 1 will cover the Etins, Rises, Thurses and Trolls.

Etins, Rises, Thurses, Trolls are all descended from Ymir, including Odin’s mother Bestla. The word Etin, is interchangeable with Jotun. They are often referred to as Frost Giants or Jotnar, the plural of Jotun. These creatures are the wild forces of nature and because of this are considered a destructive and dangerous foe to humans and the Gods and Goddesses. However, there are exceptions. Skadhi who is married to Njord, and Mimir, uncle to Odin, are both etins who have shown loyalty and cooperation towards the Aesir and Vanir.

Etins are wise and skilled in magic. Thor is very passionate about protecting Asgard against them.

Trolls are usually ill meaning, ugly wights that range in size from giant to very small. It is a broad term used to cover many unpleasant beings such as big ugly people, troublesome etins, unfriendly idises, or even the walking dead, the draugr, but most have magical powers. In modern Scandinavian languages the word ‘trolldom’ literally means ‘magic’ and may originally have meant simply ‘magical being.’ Trolls will turn into stone if exposed to sunlight. 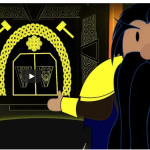