In Gylfaginning 27, High describes Heimdall as the white God. I believe this to mean that he is handsome, or good. In Thrymskvitha (15) he is said to be one of the Vanir, and the handsomest of Gods. Faulkes says:

He is known as the white As. He is great and holy. Nine maidens bore him as their son, all of them sisters.

Heimdall has nine mothers, which some have said were waves in the sea. Others say they were etins. In Voluspa en skamma Hyndla tells Freya about Heimdall’s mothers, even naming them:

(35) There was one born
in ancient times,
a very powerful son
of the family of the gods.
He had nine mothers,
those nine giant women
gave birth to the noble spearman
at the edge of the world.

(38) The earth gave him
strength to grow,
as did the cold sea,
and the blood of the boar.

He is best known as the guardian of Asgard, living in Himinbjorg, Heaven’s Mountain, at the edge of Asgard, near the Bifrost bridge. He has in his possession, a great horn named Gjallarhorn, which means ‘resounding horn’. He will sound it at the start of Ragnarok.

He needs less sleep than a bird. He can see, by night just as well as by day, a distance of a hundred leagues. He can also hear grass growing on the earth and wool on a sheep and everything that sounds louder than that. ~Snorri Sturluson

In Rigsthula, Heimdall travels the earth as the wise God Rig, fathering the classes of men; thralls, or slaves, with the great grandparents Ai and Edda, freemen, or farmers, from the grandparents Afi and Amma, and finally the noble classes with a husband and wife named Father and Mother. The poem states:

Rig knew how to give them good counsel.

which sort of cracks me up; code for impregnation.

Rig takes an interest in the noble child, who is given the name Lord:

Then Rig
came walking
to their farm,
he taught Lord runes,
gave him his own name,
called him his son,
told him
to claim lands,
to conquer lands,
conquer old villages.

This makes the Viking Era seem somehow legit since Heimdall told them to do it.

There is a reference to him as ‘Hama’ in Beowulf where he recovers the Bronsina mene from an adversary. This is likely the same tale told in Thrymskvitha, where Heimdall suggests Thor dress up as Freyja to recover Freyja’s necklace, Brisingamen. 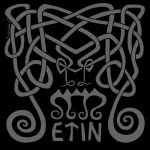