Heathenry, as it is known in modern times, is a worldview constructed from historical sources and based on the customs and belief systems of the pre-Christian, Germanic peoples of northern Europe. Heathens, as the practitioners of this religion are commonly known, call these peoples ‘the ancestors.’

One of the main goals of those that practice Heathenry is to revere these ancestral peoples by learning how they lived and how they saw the world, then applying and integrating this knowledge into their daily lives. So it can be said that Heathenry is, in part, about both study and practice.

The Intro to Heathenry course offered by The Troth is a guided form of study put together by some of the pioneers of this modern religion. Understanding the structure of the universe in the eyes of the ancestors is where we will start.

Within the cosmology of the ancestral worldview there are nine worlds.

Earth is known as Midgard. By  definition ‘mid’ means middle and ‘gard’ means an enclosed area or yard. There is a concept called innangard and utgard roughly translating from the old Norse to inner yard and outer yard which I’ll come back to, but the belief was that earth was an enclosed area in the center of the cosmos, surrounded by the other eight worlds. The popular author J. R. Tolkien used this word to derive his ‘middle earth’ in his fictional telling of Lord of the Rings.

The earth, or Midgard, sits in the center of a large tree called Yggdrasil, also known as The World Tree. In the upper portion of the tree can be found Asgard, home of the Gods and Goddesses, Vanaheim, home to another race of Gods and Goddesses, and Alfheim, home of the light elves. Sharing the center portion of the World Tree with Midgard, is Jotunheim, home of the frost giants, and Svartalfheim, home of the dark elves, or dwarves. Beneath these are Muspelheim, a world of fire, and Niflheim, a world of ice, along with a realm called Hel, where all those who were not among the Valkyrie’s chosen go when they leave the land of the living.

Völuspá & Vafþrúðnismál in The Poetic Edda:Stories of the Norse Gods and Heroes by Jackson Crawford, Hackett, 2015
Gylfalginning Ch 1-20 in The Prose Edda: Norse Mythology by Snorri Sturlson, Penguin, 2006
Ch 6 in A Practical Heathen’s Guide to Asatru by Patricia M. Lafayllve, Llewellyn, 2013
Ch 2 in Teutonic Religion by Kveldulf Gundarsson, Llewellyn, 1993
Ch 25 in Our Troth: History and Lore Vol.1, BookSurge, 2006 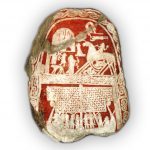 Ymir and Audhumla – Lesson One Part 2Heathenry, Intro To Heathenry